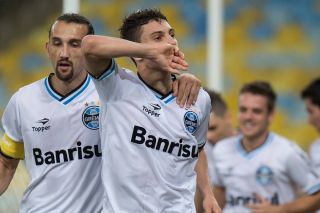 Manchester United left-back Alex Telles has revealed how he almost missed a Copa Libertadores game while at Gremio.

Telles, who joined United from FC Porto last October, started his career with the Brazilian side.

During his time at Gremio, Telles stayed with team-mate Jakson Follmann and adopted Popcorn the dog, who nearly ruined his chances of playing in a crucial Libertadores match.

“We shared an apartment in Porto Alegre, in the times of Gremio,” Telles told the Show dos Esportes program at Radio Gaucha Serra 102.7 FM, as quoted by the Daily Star.

“It was a year where we learned many things together. I adopted Popcorn and it was a hurricane at the time. He travelled less and stayed at home with her. It destroyed everything.

“One day I arrived on a trip and he told me that Popcorn ate my passport. Worst of all, the following week we had a trip to Libertadores. I had to run to make another one.

“After a while I found out that he locked her in my room because I couldn’t take it.”

Telles moved to Turkish giants Galatasaray after one season at Gremio.

The Brazil international has rarely had the spotlight shone on him at Old Trafford because there’s not a left-back in England better than Shaw at the moment.

Telles has played a bit part role since joining the club, with all of his impressive glimpses coming in the final third. His ability to cross the ball is second to none, but defensively he looks terrible.

Shaw has improved both areas of his game and is a far better rounded full-back than Telles.