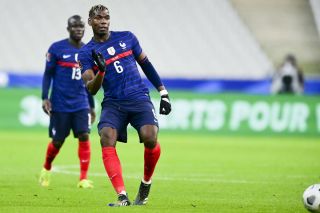 Paul Pogba is currently on international duty with France.

He came off the bench in their World Cup qualifier against Ukraine and France manager Didier Deschamps says Pogba will need more game time before he can rediscover his top form.

Deschamps told GOAL: “He is not at his best, obviously.

“On his entry against Ukraine, it also coincided with a period where the French team was not playing well. These 30 minutes are good for him. Like any player who returns from an injury, it will take time.

“The situation in November, he came with little playing time, it did not prevent him from making a great game against Portugal.

“He needs game time to perfect his physical condition.”

That shouldn’t surprise anyone with Pogba missing approximately a month of football, only returning to action for United prior to the international break.

Pogba came off the bench at half-time in the Europa League second leg against AC Milan at the San Siro – and he scored United’s only goal to see the Reds reach the next round.

He then started the FA Cup quarter-final against Leicester City last Sunday but the less said about that game the better.

However, it ended 1-1 at the Stade de France on Wednesday.

Antoine Griezmann scored the opener only to be cancelled out by Presnel Kimpembe’s own goal.

France play again tomorrow, away to Kazakhstan, before travelling to Sarajevo to face Bosnia & Herzegovina on Wednesday.

Anthony Martial could do with extra minutes on the pitch and he also played on Wednesday.

It’s been a difficult season for the former AS Monaco forward and he will need to finish the season strongly, or United could look to the transfer market for a new striker in the summer.