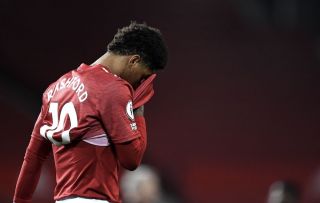 Manchester United attacker Marcus Rashford has withdrawn from the England squad through injury.

Currently on an international break, this week plays host to several World Cup qualifying matches and although he was initially called-up, attacker Rashford is already heading back to Manchester.

The FA has confirmed the news that Rashford has left the England squad and will continue his rehabilitation from injury back with his club side.

Rashford recently picked up a foot injury that saw him miss his side’s FA Cup quarter-final tie against Leicester City last weekend, so it does beg the question of why he opted to join up with the national side.

Nevertheless, despite the Three Lions preparing to face Albania and Poland, Rashford, along with Arsenal attacker Bukayo Saka will play no part.

United’s next fixture after the current international break is scheduled to be at Old Trafford against Brighton and Hove Albion on Sunday.

Rashford now faces a race against time to recover and be fit enough to help United, not just in the Premier League, but also in their up and coming Europa League quarter-final tie against Granada on April, 8.