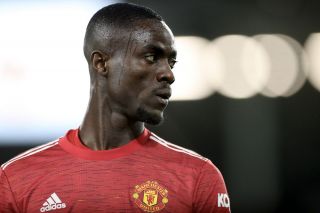 Manchester United have reportedly halted contract talks with defender Eric Bailly due to the player having major concerns over his playing time.

Since his arrival in 2016, Bailly has grown to become a much-loved member of United’s squad.

Clearly an excellent defender on his day, the Ivorian is widely regarded as one of the club’s best centre-backs.

However, despite his obvious talent, showcased by his rapid speed and ability to read dangerous situations, Bailly’s biggest obstacle remains his ability to stay fit for any great length of time.

During his near five-year-long spell with the club, the 26-year-old defender has missed a whopping 94 games through injury.

Despite this though, manager Ole Gunnar Solskjaer recently confirmed the club had opened talks with Bailly, hopeful they can extend his deal beyond 2022.

However, despite what initially appeared to be good news for United fans, there are now growing fears the defender could move on due to a lack of playing time.

After starting just seven Premier League matches so far this season, although an improvement on previous campaigns, Bailly’s first-team chances continue to be restricted.

According to a recent report from ESPN, despite the flamboyant defender enjoying life with the Red Devils, Bailly has major concerns over his playing time, which could be amplified should his employers sound out a new centre-back in the summer.

These claims come at the same time The Sun report the club and Bailly have paused contract talks.

With no word on when or even if talks will recommence, fans will undoubtedly be hoping both parties can reach an agreement, sooner rather than later.