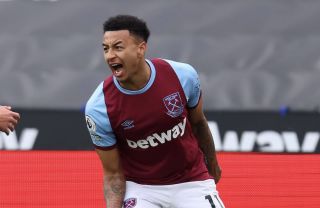 The English midfielder was shipped out on a short-term loan to David Moyes’ West Ham during the January window.

Despite playing for United since his youth days, Lingard’s last gasp loan move had fans resigned to the fact, it was probably the beginning of the end for the midfielder at Old Trafford.

Although it is widely accepted that the criticism Lingard often comes in for is exceptionally harsh, no one could have predicted the instant impact he’d have on his new side.

With Lingard’s loan move proving beneficial for all parties involved, there is growing speculation the Hammers will look to make his switch permanent in the summer.

However, in a shocking turn of events, according to The Sun, Ole Gunnar Solskjaer has been so impressed with his midfielder’s sudden upturn in form that he has not ruled out reinstating him to the first-team.

In fact, there are even suggestions the club may look to open contract talks with Lingard at the end of the season.