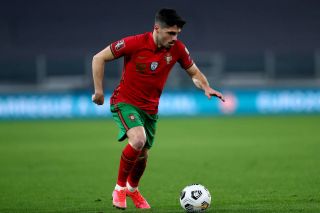 According to Duncan Castles on the Transfer Window Podcast, Wolves winger Pedro Neto is attracting interest from both Manchester United and Man City.

The Portuguese attacker will have a tough decision to make if both clubs formalise their interest, though at United he’d have a better chance of becoming a star player.

“One of the clubs that are interested and have been interested in Pedro Neto in England are Manchester City, I’m told that when they were watching Adama Traore last season and spending time at Wolves games as Neto became more of a fixture in the team, they started to see the quality of his play and considered that he may be a better fit than Traore, and they continue to hold an interest,” Castles said, as quoted by HITC.

“I’m also told that Manchester United have been observing the player and looking at him as an option for them in the right wing position.”

Pep Guardiola has greater squad depth than any manager in the league, which could put off potential signings if other options are available, like what has been reported by The Sun. The article claims that the Red Devils are planning what has been described as a ‘£50m plus’ offer.

Despite his side’s poor showing this season, it is widely accepting that Neto remains one of the Premier League’s standout performers.

It’s an area United need to address but will the money be there to address our defence and strike force as well? So many questions and I’m not too confident about the answers.

Let us know in the comments section whether you would take Neto at Old Trafford this summer?