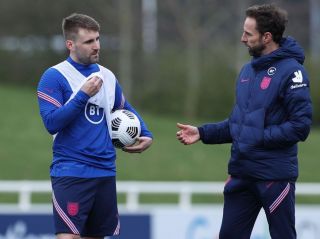 Luke Shaw has been in the form of his life for Manchester United this season and earned an international recall.

It feels like it’s been a long time since Shaw was considered for international football, but now as the best left back in the Premier League he looks set to become a key component to Gareth Southgate’s side.

Good timing too, right before the Euros kick-off.

He’s been one of United’s stand-out players this season but was an unused substitute in England’s 5-0 win over San Marino at Wembley on Thursday evening.

“He’s been very good,” said Southgate, as quoted by the Manchester Evening News. “Luke played in the first Under-21 game I took charge of.

“There’s never been any doubt in our mind about Luke’s quality.

“It’s been great to see him playing on the front foot as a full-back, with his defending and he’s been really ambitious with his attacking.

“He looks like he’s in good condition to drive forward, he’s got excellent quality with the ball, it’s a good moment for him.”

The England manager added: “He’s aggressive against his wingers, he’s difficult to play against one-vs-one, he’s getting better with his cover defending for his centre-backs.

“He’s got to find the level he’s shown at his club and play his game.”

The other biggest story regarding England and United right now is Marcus Rashford being forced to withdraw from international duty due to injury.

It seems only right since the forward has played through the pain barrier for months.

These international fixtures should be in a walk in the park for England, and Southgate has a number of options to choose from in attack. There’s no shortage because one of their main stars is now absent and he could really do with some rest.

Rashford will return to United to continue his rehabilitation.