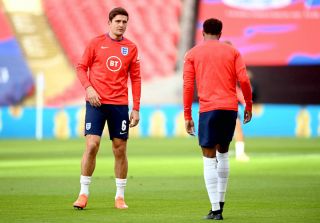 Harry Maguire has reacted to Marcus Rashford’s decision to withdraw from the England squad on Friday.

The Manchester United skipper and England international praised Rashford for the ‘principles’ he showed by accepting the call-up.

It was a controversial decision to include Rashford for the ongoing March internationals after he sat out United’s last match due to injury.

Gareth Southgate is also aware that the player has played through a pain barrier in recent months with an ongoing shoulder issue which is likely to require an operation.

However, the 23-year-old suffered a foot injury during United’s Europa League clash against AC Milan at the San Siro. He had to be pulled at half-time due to the knock.

As a result, he missed the FA Cup quarter-final defeat against Leicester City.

“It’s a bit strange with everything that’s going on, with the pandemic,” Maguire is quoted via MEN. “That shows a lot from Marcus, it was a little reminder of the way we work, the principles we’ve got.

“It’s really important to show the group is together and Marcus has come even though he probably knew in his mind he wasn’t going to be fit, it shows the spirit between the players.”

Does it show spirit or someone being a little naïve? United need to win most of their games between now and the end of the season to finish second in the Premier League. That is our ultimate objective along with the Europa League.

These are easy fixtures for England. They are expected to win with or without Rashford in the side and he needs a rest at the moment.

The last thing United or England need is Rashford burning out.

Southgate’s arguably the most naïve person in all of this.