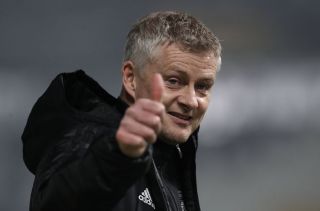 Blomqvist, now retired, turned out for United for three years (1998 – 2001) and was, of course, part of Sir Alex Ferguson’s incredible treble-winning side.

Not only has Blomqvist lifted some of the biggest trophies in world football for United, but he did so playing alongside current manager Solskjaer.

Solskjaer has been United’s manager since the end of 2018 and although he was originally deemed to be an emergency stand-in, an incredible unbeaten run quickly saw the Norwegian given the job on a permanent basis.

Despite failing to win a trophy, recent reports claimed Solskjaer is in line for a bumper new deal that would see him extend his stay in the Old Trafford dugout.

Reacting to the news his old team-mate is set to afforded even more time at the helm of the biggest club in England, Blomqvist, while speaking to TalkSPORT, said: “We’re not there yet because we’re not anywhere near Manchester City or Liverpool.

“They have quite a bit [to go] still, but if we keep progressing, keep in in the same pace as we have now, we’ll be there definitely.”

Going onto address the possibility of United lifting their first major piece of silverware under Solskjaer, Blomqvist said: “I definitely do think so. It was a bit frustrating with the FA Cup against Leicester.“But they’re getting closer and closer. For me, the most important thing is that you can see the progress on the pitch if you compare it with a couple months back.

“Winning silverware is of course the final target, but as long as you can see the progress on the pitch, you will be happy.”