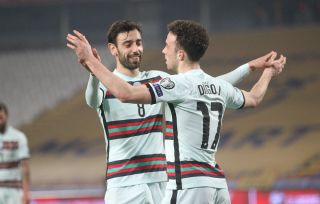 Try find a Manchester United fan who won’t be happy hearing Bruno Fernandes has the next week to rest. It would be an almighty task.

The Portugal midfielder was booked in his national side’s World Cup qualifier against Serbia tonight, which means he is suspended and set to miss their upcoming qualifying match against Luxembourg.

Bruno Fernandes gets a yellow card against Serbia (also got one against Azerbaijan), which means he misses Portugal’s next match through suspension.

Fernandes was also booked against Azerbaijan.

Tonight’s match ended 2-2 after Portugal went in at the break with a two-goal lead thanks to Liverpool’s Diogo Jota. However, Serbia were able to climb back into the game and managed two goals in the second half to make for an entertaining international tie.

Moreover, Nikola Milenkovic was sent off in stoppage time.

It goes without saying that most things go through Fernandes in the current United set up. He’s the one who makes us tick in the final third, even in games he goes completely missing in.

Fernandes is our most important player so the rest will do him go ahead of the business end of the season.

He will be aiming to end the campaign with his first trophy as a United player and the team’s first under Solskjaer.

It’s a huge blow to be knocked out of the FA Cup, especially when it looked like an easy route into the final after drawing Southampton in the semi-finals, but we still have a chance at winning the Europa League.

We will need Fernandes at his best and he can now focus on getting back to Manchester with his family and club.