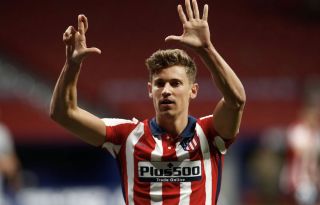 Atletico Madrid will reportedly not allow midfielder Marcos Llorente to depart for anything less than £102m, amid suggestions the Spaniard has emerged as a target for Manchester United.

Llorente, 26, has quickly grown to become one of Diego Simeone’s most valued squad members as he continues to play a vital part in the team’s success.

Most notably, the side’s domestic form this campaign, with Llorente continually at the heart of their midfield, could see them go onto win their 11th La Liga title.

Following on from what has been a hugely impressive period, Llorente’s versatility, as well as his goal-scoring contributions, have seen him linked with a big move to United.

However, despite the exciting news earlier this week, the latest in the ongoing saga comes from Spanish outlet Marca, who claim Simeone will not allow his midfielder to depart on the cheap.

It has been claimed that Atletico Madrid would only sanction a move should a bid of €120m (£102m) be made.

Although Llorente is improving week on week, it goes without saying, no one can really expect the Red Devils to pay for that kind of money, especially while still in the COVID-era.

Llorente could therefore be one the club keep their eye on for further down the line – no way does he move for over £100m though, that much is for sure.