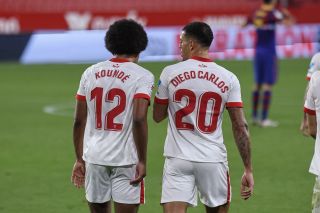 Kounde, 22, has emerged as one of Ole Gunnar Solskjaer’s summer centre-back targets.

Following back-to-back impressive campaigns with Sevilla, Kounde has grown to become one of Europe’s most highly-rated young defenders.

It is widely accepted that Solskjaer and his recruitment team are hopeful of signing a long-term centre-back partner for captain Harry Maguire.

Although the Red Devils have been strongly linked with a host of defensive talents, their interest in Kounde appears to be not only long-standing but also legit.

However, speaking in a recent interview with Spanish outlet AS, Kounde’s team-mate Carlos has fired Solskjaer a warning ahead of the summer window.

Carlos believes competition for Kounde’s signature is only going to grow with every passing game with the Brazilian admitting he is unsure of his team-mate’s long-term future.

“Many clubs will be interested in him, for sure,” Carlos told Spanish daily AS (as quoted by MEN). “[With] every game he grows, every minute that passes we see that he evolves and gains confidence and experience. That is important.

“I don’t know what will happen to him in the future.”

Kounde’s contract with Sevilla expires in 2024 with the Spanish defender rumoured to be valued at around €70m.