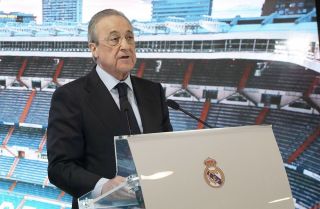 According to recent reports, Real Madrid president Florentino Perez has been left angered that Manchester United have pulled ahead in the race to sign Villarreal centre-back Pau Torres.

That’s according to Spanish outlet El Desmarque, who claim the Los Blancos chief is furious that Premier League giants United are in the driving seat to land Torres.

Since forcing his way through Villarreal’s youth academy, the talented defender has enjoyed a remarkable rise, which of course, is echoed by the fact some of Europe’s biggest clubs are vying for his signature.

Only earlier this week English outlet MEN reported the defender himself would welcome a move to Old Trafford and since then, the saga appears to be hotting up nicely.

El Desmarque’s latest report claims that Perez ‘cannot believe’ United have been allowed to ‘steal’ the Spaniard from their grasp.

However, given United’s seemingly strong position in the chase, the La Liga giants already appear to have conceded the race for Torres.

Read more: Opinion: The end of the road for Anthony Martial?