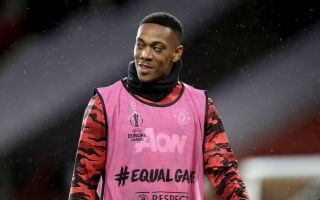 Tony Martial came from France, English Press said he had no chance – £50 million down the drain, Tony Martial scores again.

Anthony Martial’s song often reverberates around Old Trafford and in United’s away sections over the last five years but is his time at Manchester United coming to an end?

He had a brilliant first season, so full of potential, but he has not lived up to the potential we saw in that season. There were issues with managers Louis Van Gaal and Jose Mourinho, but he looked more like the player he could be under Ole Gunner Solskjaer in his early reign.

Over the last two seasons he has wanted to play as an out and out number 9 and last season he scored 23 goals in 48 games but this season his form seems to have fallen off a cliff.

His form suffered dramatically in January 2018 when United signed Alexis Sanchez and he was pushed out of the team, it seemed this might be the end of his time at the club. There was even speculation Mourinho wanted rid of him that summer but the Portuguese gaffer later departed and in January 2019, Martial signed a new five-year contract.

Seemingly, Martial along with Marcus Rashford and Mason Greenwood would form the core of United’s attacking talent for years to come. United brought in experienced striker Edison Cavani this season and his impact on the team and his movement has got fans and pundits questioning if Martial is the striker United need and if he should still be at the club.

Martial has his strengths – his ball control and pace are clear to see, but the Frenchman’s best attribute is undoubtedly his finishing. This is something that when he plays badly covers the other deficiencies in his game but when he is not scoring – it highlights those weaknesses massively.

However, the Premier League is a physical league, so you need to be able to cope with defenders fouling you, I don’t believe Martial does this as there are too many games where the defenders bully him, and his game goes to pot very quickly.

Sadly, in recent years it seems the first couple of touches he has seem to dictate the game he has, take our recent win over Manchester City, his first few touches were positive, and he won an early penalty and was sublime for the rest of the game but against Leicester in the Cup he had a bad start and was anonymous.

He is the epitome of a confident player – when he is up for it then he can be unplayable but if he is not on it then effectively down to ten men.

I have criticised Martial a lot over the last few years, I think he has lost his left-wing position to Marcus Rashford and now lost his position to Edison Cavani up front.

In future years I think Mason Greenwood will be United’s number nine, plus with Amad Diallo, and Jadon Sancho potentially coming in (if you believe all the gossip columns) this might limit his place in the side

Also, if Greenwood plays more as a number nine in future rather than on the right-wing, so this puts him as a backup in both positions and that’s not good for him or the club.

He is the player that frustrates me so much as a fan because he has the skills to be whatever he wants to be, but I don’t think he has kicked on the way he should have done considering his talent.

I have given up on Anthony Martial as I think his time has come and it might be time to cash in as his value will only go down the worse he plays so maybe it’s best to get as much as possible for him to reinvest in the squad going forward.

Martial came in at a time of change for United and showed glimpses of magic and is responsible for some amazing moments in his time at United. The debut goal at Liverpool, the FA Cup semi-final winner against Everton are the two standouts but I am sure we all have a great Martial moment to remember.

I think that sometimes we as fans project onto players our hopes and dreams for them, we all wish we could play for the club of our dreams in United. For me, Martial came at a time of change in my life as I started a new job coinciding with his debut goal, I felt he had all the potential to go on and become of the greats.

My life didn’t exactly go to plan so maybe I became more frustrated with him as I saw him not fulfilling his own potential as I hoped he would have, a lot of anger towards him might be because we saw his potential and fans feel he is not taking the chance he has been given and nothing annoys a football fan like wasted talent.

The last few months watching Cavani play the role of number-nine made me realise that Martial won’t be the striker United need going forward. Cavani’s experience and movement are superb as well as his closing down. Watching an experienced striker play the position highlight the areas Martial can’t replicate and this season it just seems to have fallen apart for him.

He has scored seven goals so far this season and that just isn’t enough, a hard part of football is admitting that one of your favourite players just isn’t good enough anymore. We ignore the mistakes and deficiencies in their game, blaming managers and other players and tactics for their bad performances.

Fans double down as we try to protect them and in a way ourselves from the truth as we never want to admit that it might be time for them to call it a day at the club. He wouldn’t be the first precocious talent to emerge and not fulfil his undoubted potential nor will he be the last. Fans protect their favourites and when faced with uncomfortable truths we can bury our heads in the sand to avoid confronting the harsh facts sometimes.

We hold on to the notion that it is just bad form, they will come back but slowly the realisation sets in and you realise that everyone else might be right. There is a long way to go this season and there is still time for more highs for him to hit but alas I think there will be an odd moment but not enough to change opinions.

However, I do feel the damage might have already been done and Solskjaer might have lost patience and as a striker himself if he can’t make it work then it is best to let him move on. You feel that Solskjaer would have given him pointers and tried to work with him on the training ground but if it is not working then maybe it’s time to make the tough decision.

This is not the end for Martial but merely the end of this chapter of his career and he can look at his old teammate Romelu Lukaku as an example of life beyond Manchester United. Martial had some amazing moments in his time at United but the team is evolving and going in another direction and there is always a casualty of that, and it looks like it could be him.