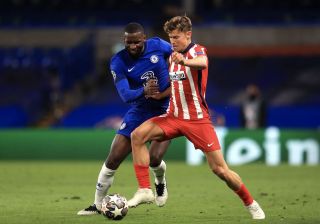 Since arriving at the Wanda Metropolitano Stadium, the Spanish midfielder has gone on to feature in 75 matches and directly contribute to 29 goals, in all competitions.

However, according to a recent report from Spanish outlet AS, despite the midfielder only being two years into his five-year deal, Llorente came close to being moved on in January.

The outlet claim that Ole Gunnar Solskjaer’s Red Devils recently made an offer of £68.5m (€80m), which was obviously turned down.

However, where the proposed deal hit a stumbling block was because the player himself does not want to leave Madrid.

Despite the financial woes of most clubs, Atletico Madrid included, Llorente’s preference is to remain with Diego Simeone’s men.

Most shockingly though, the outlet claim United’s £68.5m offer is ‘still on the table’.

Atletico Madrid crashed out of the Champions League earlier this month, and the Red Devils know this will only worsen finances which could now prompt the Los Colchoneros into accepting.