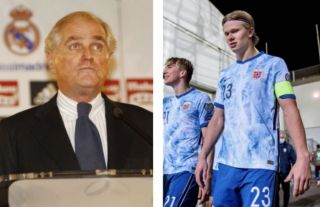 Borussia Dortmund’s star striker Erling Haaland is set to be the next big name to make a sensational switch from the Bundesliga. When the time comes, Manchester United, as well as rivals Manchester City, Chelsea and La Liga duo Real Madrid and Barcelona are all expected to be in the mix. However, according to former club president Ramon Calderon, one club that could be forced way back in the pecking order is Real Madrid.

Haaland, 20, has enjoyed a truly remarkable rise is in European football.

The young Norweigan’s inspired form since he arrived at Dortmund a little over 12-months ago has seen him shoot to the top of several club’s summer wish-lists.

One club who have been relentlessly linked with the 20-year-old, even prior to his Dortmund switch, is Ole Gunnar Solskjaer’s Red Devils.

Having previously managed Haaland during the pair’s days at FK Molde, the suggestions of a Scandanavian reunion were inevitable.

However, as the summer window fast approaches, of course, the suggestions of where Haaland could end up next are heating up.

The latest in the ongoing saga comes from Real Madrid’s former president Calderon, who has sensationally claimed that his old side may not actually be that serious about signing Haaland.

While speaking live to TalkSPORT (as quoted by MEN), when asked about Los Blancos’ pursuit of Haaland, Calderon said: “There are always rumours at this time of the season.

“They are talking about Mbappe, Haaland… too many players.

“We are not in the best form economically-speaking because we are refurbishing our stadium spending a lot of money.

“It will be difficult to spend money in the summer.

“We always try to sign good players, we’ve been doing that for years.”