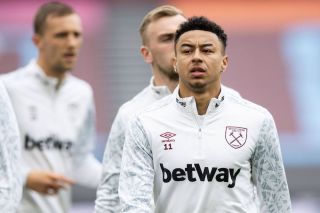 On-loan Manchester United midfielder Jesse Lingard has been enjoying such an upturn in form that according to reports, the Englishman’s resurgence has prompted Manuel Lanzini to want out.

Midfielder Lingard joined David Moyes’ men in January and although his loan was only supposed to be until the end of the season, there is growing speculation the move could turn permanent in the summer.

After directly contributing to eight goals in just his first seven appearances, in all competitions for the Hammers, Lingard is quickly becoming undroppable.

However, with one player’s inspired form, comes another’s misery.

According to a recent report from Football Insider, Lingard’s incredible performances, which has seen Lanzini resigned to the bench, will see the South American request a move elsewhere.

The outlet claim to have inside knowledge that despite Lanzini being with the Hammers for the past five years, he is now actively seeking a new challenge.

Should Lanzini get his wish and depart in the coming months, we have no idea who could permanently replace him – Any ideas?