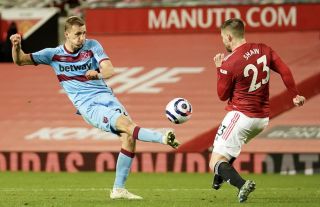 West Ham United’s first-team coach Stuart Pearce has shut down any suggestions midfielder Tomas Soucek could leave the country’s capital in the summer.

Soucek, 26, has enjoyed an excellent campaign for the Hammers after making a £14.58m switch from Slavia Prague last season.

The newly crowned Czech player of the year has already featured in 29 domestic matches and directly contributed to a respectable nine goals.

Arguably the main driving force behind the Hammers’ outstanding season, which sees them vying for a place in Europe next season, Soucek has been a revelation in London’s east end.

In light of the commanding midfielder’s inspired form, Soucek has seen his name linked with a big summer move, most notably to join up with Ole Gunnar Solskjaer at United.

However, despite the strong links, coach Pearce has been quick to pour cold water on any suggestions the Hammers could be about to lose their main man.

Speaking recently to TalkSPORT (as quoted by The Sun), Pearce, when asked about Soucek’s future, said: “No, he’s happy here and he’s not going anywhere, that’s for sure.

“He’s been brilliant here, I’ve got to say. Dave (Moyes) brought him into the club in January of last season and since then he’s just been brilliant.

“He’s got a wonderful attitude to work, on his days off he comes in to work, he’s just really an absolute pleasure to work with.”