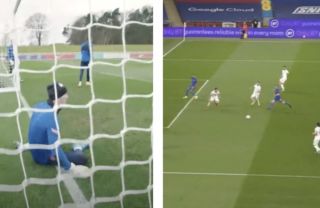 During England’s recent training session ahead of their World Cup qualifier against San Marino on Thursday, Manchester United goalkeeper Dean Henderson was the first person to identify the effectiveness of James Ward-Prowse’s late runs into the box.

The training session saw Henderson and Sam Johnstone alternate between the sticks with Manchester City duo Phil Foden and Raheem Sterling pinging crosses into the box.

It quickly became apparent how effective Ward-Prowse was whilst perfectly timing late runs into the box – In fact, the training session saw a virtually identical blueprint of how the midfielder opened Thursday’s scoring against San Marino.

But back to the training session – During the drill Henderson can be heard saying: “Ohhh Prowsey, I hate you man.”

“Prowsey mate, you’re so good at that bruv.”

Clearly the United shot-stopper knew the midfielder’s deadliest trait – something which he has quickly proven to be effective during a real match scenario.

Scouting role for Henderson once his playing days come to an end? – Sign him up, Ed!

Skip to 7:00 onwards in the clip below to hear the player’s exchange.