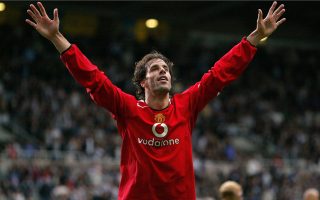 After suffering a horrific cruciate knee ligament injury during the summer of 2000, it seemed the Dutchman would never get his dream move to Old Trafford but fast forward a year later, Sir Alex Ferguson paid a then British record fee for his services.

And well, the rest is history.

There have been few if any better goal scorers in Manchester United’s history than Ruud Van Nistelrooy. His sublime finishing combined with his electrifying face made the Dutchman one of the finest strikers the game has ever seen and he was pivotal in the club’s success in the 2000s.

Right from the off, it was clear Fergie had signed somebody special. A whopping 36 goals in all competitions for the Reds surpassed even some of the most optimistic united fans expectations as he was named PFA player of the year.

His goals may not have been enough to win United the title that season but it was evident that Fergie had signed one of the best strikers in Europe.

As the second season got underway Van Nistelrooy continued to shine.

If people where thinking it was a case of him being a one season wonder then by the second season there was no doubt by anyone in world football that Van Nistelrooy was fast becoming one of the most feared strikers on the planet with his finest hour coming against Fulham at Old Trafford where the Dutchman scored a sensational hat trick with his finest goal coming in the second half after picking the ball up in his own half the forward dribbled past the Fulham backline before neatly slotting the ball home past the Fulham goalkeeper and into the back of the net. The Dutchman ended the season with a whopping 44 goals in 52 games as Manchester United reclaimed the league title back from arch rivals Arsenal. He was instrumental that season and with Van Nistelrooy leading the line United wouldn’t have won the title that season.

The following campaign saw Van Nistelrooy continue to shine as the Dutchman once again netted over 30 goals for United.

The Dutchman was not only essential for scoring goals but his presence alone up top helped United and without him they were simply not the same side.

As the seasons went by the goals continued to flow with the Dutchman pivotal once again in United success but signs of Van Nistelrooy’s time at United ending where starting to emerge.

The arrivals of then teenagers Cristiano Ronaldo and Wayne Rooney in the mid 2000’s started a change of the guard at Old Trafford.

Fergie was in the process of putting together a new young team to challenge Chelsea for the Premier League title again and as time went by it was becoming clear that the Dutchman wouldn’t be part of those plans.

The defining incident came in the 2006 League Cup final where Van Nistelrooy was dropped.

It was a moment which shocked the Reds faithful, as in years gone by Van Nistelrooy would have been the first name on the team sheet but now that wasn’t the case and it was clear that his days at Old Trafford were numbered.

The Dutchman’s time at Old Trafford was officially brought to an end in July 2006 where it was announced the Dutchman would be joining Real Madrid, bringing to an end a five year stay at the club.

Van Nistelrooy was arguably the finest striker in the club’s history and the records speak for themselves.

I for sure am not alone at saying that Ruud Van Nistelrooy was arguably the best goal scorer I have ever witnessed play for United. He was just that prolific and despite exiting the club over sixteen years ago, his legacy at the club will never be forgotten.