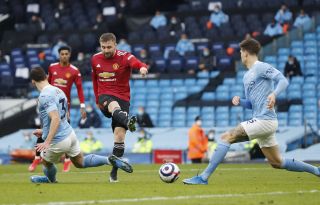 Who is your Manchester United player of the month?

United have announced three candidates for their March award, after a month that included a Manchester derby win at the Etihad but ended sourly as they were outclassed in the FA Cup quarter-final by Leicester.

Luke Shaw, Victor Lindelof and Dean Henderson have been named on a three-man shortlist with United relatively solid defensively across the six games.

Whether the goalkeeper has done enough to remain number one ahead of David De Gea at Old Trafford will be indicated in Solskjaer’s selection for the first game after the international break at home to Brighton.

Meanwhile, Shaw should be favourite to retain the award he won in February after another run of consistent performances from the best left-back in England.

Shaw was United’s only attacking threat in a drab draw against Palace and he was outstanding in all areas in his goalscoring showing against Pep Guardiola’s City.

The 25-year-old should have started against Leicester in the FA Cup defeat but Solskjaer preferred to rotate and afford an opportunity to Alex Telles.

Lindelof is also a notable nominee after an almost flawless performance at the Etihad and he stood tall when United needed to be resolute in the second-leg of their Europa League tie in Milan.

As per ManUtd.com, fans can vote via the club’s official app and the winner will be announced on Monday.