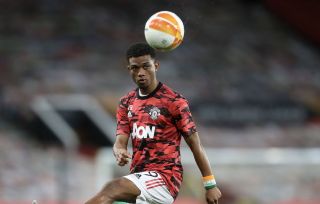 Manchester United’s new wonderkid Amad has been tipped to go on to win the illustrious Ballon d’Or award in the near future.

The young Ivorian attacker has had virtually an instant impact since completing his big-money move from Atalanta in January.

After opening his United account against AC Milan in the Europa League earlier this month, fans cannot wait to see more of their talented teenager.

Despite his excellent start to life in English football, Amad still appears to be some way off starting week-in, week-out.

However, following a recent injury suffered by wide-attacker Marcus Rashford, the young Ivorian could be gifted more playing time once squads reassemble after the current international break.

In light of Amad’s impressive breakthrough, one name who has been quick to praise the young attacker is former AC Milan and Italy goalkeeper Giovanni Galli.

Whilst speaking exclusively to Goal, the former keeper, who was later introduced to Amad whilst working as a sporting director for Serie C side Lucchese, said: “Amad is unique, but he must make himself stronger.

“At the same time, he must make sure he does not lose his speed, which is a quality that distinguishes him from others.

“In short, I think he has all the qualities to be a candidate for the Ballon d’Or in the next five years.”

Galli’s remarkable comments come just after it was announced that Amad had been named among Goal’s best youngsters in world football.

The future certainly does look bright!