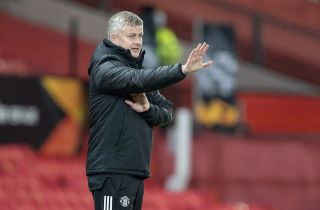 Manchester United’s hierarchy is reportedly preparing to offer manager Ole Gunnar Solskjaer a new contract, regardless of if he guides the side to European glory or not.

The Red Devils currently sit second in the Premier League but still remain some way off leaders and arch-rivals Manchester City.

Although there has been clear progression in terms of domestic position, United’s trophyless drought continues to go on.

Having failed to lift a major trophy since former manager Jose Mourinho won the Europa League in 2017, fans are becoming increasingly more eager to see the four-year wait finally come to an end.

Frustrations have been amplified by the fact Solskjaer and his Red Devils have crashed out of several cup competitions in the latter stages in recent seasons.

Last season saw the side lose two semi-finals back-to-back; one in the Europa League against Sevilla and the other against Chelsea in the FA Cup.

Cup misery was piled on recently after Brendan Rodgers’ highly-impressive Leicester City dumped the side out of the FA Cup, this time at the quarter-final stage.

However, despite the agonising wait to see the Red Devils get back to cup-winning ways, according to a recent report from ESPN, the club’s decision-makers are still committed to seeing Solskjaer succeed.

The report claims that even if United do not go on to win the Europa League, the club are still likely to offer Solskjaer a new contract.

United are set to face Granada in the competition’s quarter-finals on April 8.

Read more: All you need to know about Man United players on international duty