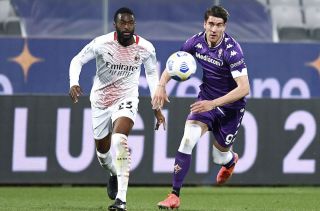 According to recent reports, Manchester United have taken a keen interest in Fiorentina striker Dusan Vlahovic.

After forcing his way into the side’s first-team plans, Vlahovic has enjoyed a recent rise, most notably due to his domestic goalscoring.

Despite turning out for an underperforming Fiorentina side, Vlahovic has remained a rare source of quality.

After featuring in 27 Serie A matches, so far this season, the young Serbian striker has already managed to reach double figures (12).

The commanding marksman’s impressive form has recently seen him linked with a move to either Borussia Dortmund or West Ham United.

However, according to a recent report from Italian outlet Corriere dello Sport (via Sports Witness), several other top clubs have now also joined the race.

The outlet goes on to list Real Madrid, Liverpool and Ole Gunnar Solskjaer’s Red Devils as three clubs who could look to make a summer move.

United have also been relentlessly linked with Vlahovic’s team-mate and defender Nikola Milenkovic.