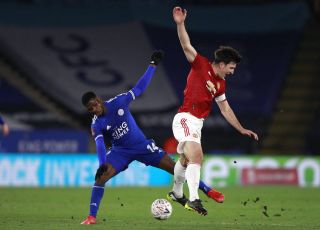 The Manchester United legend says Maguire should have known not to play such a high-risk pass to Fred in the build-up to the goal.

Leicester City booked a spot in an FA Cup semi-final against Southampton as a result.

Mason Greenwood cancelled out Leicester’s first goal but United were not able to build on that before the Foxes scored their second and third.

It was bitterly disappointing to crash out of the FA Cup at the weekend because the next two weeks are facing up to be an international hangover period for those who only care about club football, which is a lot of us.

However, it was tough return to Leicester for Maguire. He spent two years at the club before his world-record move to Old Trafford.

Ferdinand wasn’t impressed with the role he played in giving Leicester the lead.

On Rio Ferdinand Presents FIVE, he said: ‘Fred should be doing better than that and he’s been caught a couple of times before in that type of situation.

‘As for Maguire, one criticism I would have, is I would say: “Know your players.”

‘If that’s Van de Beek, if that’s Pogba, if that’s Bruno Fernandes, you play then the ball like that and it’s not a problem.

‘But if it’s someone where you feel that’s not a strongpoint, then maybe you why away and play past that.’

Ferdinand believes Leicester wanted it more at the weekend.

‘I don’t think they were at the races at all,’ he added.

‘Mistake from an individual or not, Leicester rightfully got the result because they were there better team.

‘They had that fire in their belly, you could see that they had that spark about them that Manchester United were lacking.’