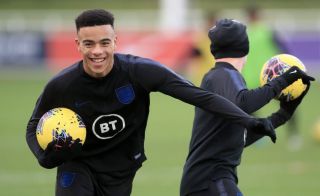 Manchester United attacker Mason Greenwood has been injured ahead of international duty with England’s under-21s.

Following an untimely injury, Greenwood, 19, has been forced to drop out of England’s under-21s squad ahead of the European Championship’s group stages.

Sky Sports report that Greenwood’s recent injury has forced the youngster to withdraw from the squad, with Norwich City’s Todd Cantwell stepping in, in his place.

England’s first game of the illustrious youth competition, which kicks off on Wednesday, is scheduled to be against Switzerland on Thursday.

However, one player the young Three Lions will no longer be able to rely on is United’s highly-rated Greenwood.

Although Sky Sports’ report does not detail exactly how the young striker has injured himself, it will undoubtedly come as a blow to club manager Ole Gunnar Solskjaer.

After seeing Edinson Cavani and Marcus Rashford both pick up recent injuries, Solskjaer has been forced down the bare bones of his attacking options – And Greenwood’s injury will do nothing to ease those pressures.

At the time of writing – It is not yet known if the young Englishman will be fit in time for United’s next game against Brighton on April 4 – We are waiting for more details to emerge.