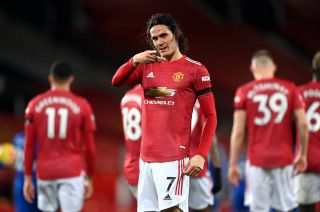 Despite only joining Manchester United in the summer, it sounds like the former PSG striker won’t be sticking around for much longer.

I don’t say that on the back of recent comments made by Sosa, but they come after a number of comments – including Cavani’s father – which suggest he is missing home and wants to return from Europe.

Cavani has only managed to start nine domestic matches for the Red Devils this season. It’s not enough and we need a centre-forward who will lead the line every week.

Now in his mid 30s, questions should be asked whether he is capable of playing every week in the Premier League because on the basis of this season he certainly isn’t.

Sosa told Polideportivo (H/t TNT Sports): “I’ve spoken with Cavani, we always send each other messages by phone. I’m closer to Cavani, who I think wants to come to Nacional.

“He has more desire than Suarez. Suarez wants but the family may stop him. Cavani, his will is to come to Nacional and he’ll be welcome.”

Interestingly, the club his father, Luis Suarez, referenced was Boca Juniors in Argentina.

Sosa seems to think Cavani will drop an even further step after leaving the Premier League.