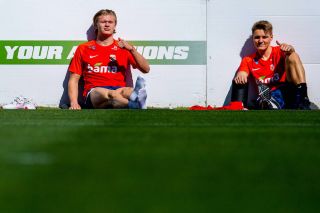 It’s pretty clear now that Haaland’s next move will be a big one. The Norwegian will leave Borussia Dortmund and join one of Europe’s leading clubs at some point in the near future.

Most of us want to see United sign the 20-year-old, but it’s going to be a tough ask when there will be a range of top clubs in the running for his signature. The Manchester Evening News claims Haaland is our priority as a striker signing.

Haaland has 49 goals and 11 assists in 49 appearances for BVB.

The striker addressed the rumours surrounding his future and insisted he remains fully committed to the Bundesliga side, despite his little tantrum when they dropped more points at the weekend.

“I still have a three-year contract with Dortmund and I am not disturbed by rumours,” Haaland told Diario Sport (H/t Football Espana).

With the international break upon us there will be plenty of transfer speculation to go through. It also seems like the press want to ask Solskjaer a question about Haaland every time he holds a press conference.

The summer will be an interesting one for Dortmund because they could also lose Jadon Sancho. Things have not gone to plan on the pitch this season and BVB are running the risk of losing a good team without winning any trophy with it.

How’s that for your Bundesliga business model?

Listen to the latest episode of the Strettycast below, also available on Apple Podcasts, Spotify and aCast.