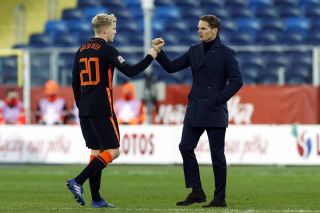 The trio started in Sunday’s disappointing FA Cup defeat at the hands of Leicester City.

Pogba made his first start in six-weeks after an injury lay-off and Van de Beek made his comeback, with both playing a role in Mason Greenwood’s first-half goal.

Sadly, it wasn’t enough because Leicester scored three at the King Power Stadium.

Both Pogba and Van de Beek were substituted when United brought four players on in the 64th minute.

Martial got his first start in 10 days but offered very little again. The international break couldn’t come at a better time for the forward who needs games and maybe a change of scenery.

I would go as far to say it’s been his worst campaign yet in a United shirt.

“I think an international break now will give Donny and Paul, hopefully, chances to play,” Solskjaer said, as per Manchester Evening News. “It will give Anthony a chance to go away with [France], they get a change of scenery, you get energy from that.

“The boys have been at Carrington training ground every day for a long, long time, and that change of scenery will give you some energy as well.

“The break comes at a good time and we’ll be ready at Easter, don’t worry about that.

“I think we’re building a squad that can cope with it but we’ve had six or seven injuries at the same point in the same positions, to be fair, which made some players play a lot.

“But that’s something we have to get used to, if and when we are to be successful, we have to handle this and hit a higher level than we did today. That’s what we’re striving towards.

“I’ve been impressed. Under these circumstances, which are unprecedented, I don’t think anyone anywhere in the world has experienced these times before. I’ve been impressed by my boys. The run we’ve been on has been excellent. Unfortunately we couldn’t find ourselves tonight and sometimes that happens.”

We will be keeping a close eye on all United players during the international break, so rest for us during this so-called break. Hopefully everyone returns injury free and without traces of COVID-19.