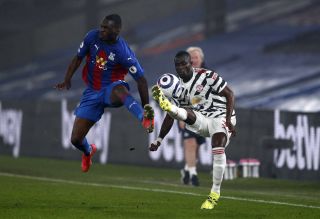 Manchester United defender Eric Bailly is reportedly concerned he will be forced out of the club once the summer transfer window opens.

Bailly, 26, seems to be positioned below Victor Lindelof in the manager’s pecking order. The Swede tends to get the nod as long as he’s fit, but ultimately our defense would probably improve if the Ivorian was able to get a long run of games together without any niggles or serious injuries.

According to Sky Sports, Bailly is becoming increasingly concerned United are only trying to push his value by rewarding him with a new contract.

The outlet claims to have spoken to a close friend of the defender, who said: “Eric loves the club and the fans, his family are settled in Manchester and he’d like nothing more than to spend the rest of his career at Old Trafford.

“But he feels the club has been very disrespectful towards him and frankly he’s had enough.

“He feels that no matter what he does, he will never be first choice for Ole.

“He now realises he’s too good and too young to spend his time sitting on the bench.”

United need to sign a new centre-back in the summer which could see Bailly fall further down the pecking order at United. He’s probably aware of the situation and needs to decide on the next chapter of his career.

Ultimately, I’d like Bailly to stay because he’s a better option to have than Lindelof and Axel Tuanzebe.

Listen to the latest episode of the Strettycast, also available on Apple Podcasts and Spotify: