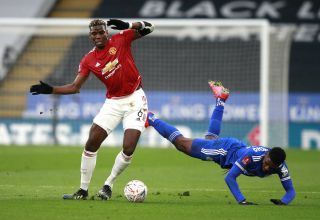 Alan Shearer thinks a decision has already been made on Manchester United midfielder Paul Pogba’s future.

The Frenchman has just over a year left on his deal at Old Trafford, meaning United could be forced into selling him to avoid the risk of losing him on a free transfer.

United’s board will be up against it with Mino Raiola, a notoriously outspoken agent who previously said his client’s time at United was ‘over’.

Ole Gunnar Solskjaer has touched on the possibility of Pogba signing a new deal, though, with the 28-year-old playing better since the turn of the year (2021) when fit.

In what was a busy week for United – reaching the Europa League quarter-finals and crashing out of the FA Cup – Pogba returned after six-weeks out injured and netted a crucial goal in Milan on Thursday night.

Speaking ahead of the FA Cup quarter-final defeat against Leicester City, Shearer praised Pogba for showing his ability on a consistent basis, which is something he’s been criticised for not doing previously.

Shearer said (via MEN): “We’ve said it so many times that the ability is there but we probably haven’t seen it enough. We know what he can do, he did it in the week when he came on and scored and has been injured for the last six or seven weeks.

“So, it depends what he wants, but I expect the decision has been made already on whether he’s staying or going.”

Let us know in the comments section if you think Pogba will sign a new contract at Manchester United?