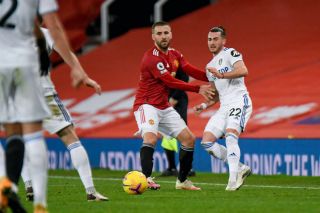 Following his deserved recall to the England squad, Luke Shaw has admitted he thought his international career was over.

The Manchester United left-back has played only twice for Gareth Southgate but his displays this season have made it very difficult for the England manager to continue leaving him out of the squad.

“Yeah, I think so,” Shaw told United’s official site when asked if he believed his hopes of representing England were over.

“At times, I made bad mistakes, pulling out of squads, maybe at times when I shouldn’t have. That was down to me.

“Of course, back then, I was going through bad times. There [sic] was in back of my mind, especially my family and my girlfriend, they thought that it was done.

“At the start of the season, I had ambitions and sat down with my girlfriend and said that I wanted to get back in the England squad, doing everything I can to get back there. You know, of course, with my form, I thought there was a bigger chance than ever that I could get back in it.

“Gladly, Gareth’s given me another opportunity to be involved in there, so I’m just really happy and honoured to be selected again. Hopefully, I can show Gareth why I deserve a spot in the squad.”

It’s strange that the last time Southgate had to name his squad – in November 2020, to face the Republic of Ireland, Belgium and Iceland, with Southgate relying on Ben Chilwell — Shaw wasn’t part of the conversation.

Time will tell how Shaw’s recall will change Southgate’s tactical thinking for the World Cup qualifiers against San Marino, Albania and Poland.

This is a player in the form of his life. There’s no left-back in England better than Shaw at the moment, so it will be intriguing to see how he works in a different system.

Shaw’s driving runs have been a feature of United’s play and it feels as though he has took on extra responsibility within the team with more players looking to find him free on the left flank.