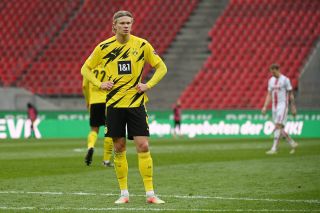 Erling Haaland was not happy on Saturday.

Europe’s most in-demand striker scored twice but Borussia Dortmund were still held to a 2-2 draw by FC Koln on Saturday.

Erling Haaland looked frustrated after his side were held to another draw in the Bundesliga.

The 20-year-old has been linked with an array of clubs, including Manchester United and City, and this week BVB learned that they will take on Pep Guardiola’s side in the UEFA Champions League semi-finals this season.

Haaland secured a point for BVB with a 90th-minute equaliser (match report via ESPN) – his 21st Bundesliga goal of the campaign – and now they find themselves in a fight for a top four finish (currently fifth in the league).

This is an underperforming BVB side with faults and they will be in huge trouble if they lose their two main players when the summer transfer window opens.

At the full-time whistle Haaland was seen handing his shirt to an FC Koln player before storming down the tunnel.

ESPN FC shared video footage of Haaland at the full-time whistle on Twitter:

Haaland will join a club aiming to win league titles when he leaves Dortmund. And he will make a huge difference to whatever team he joins, and if he ends up in the Premier League I hope it’s United.

Ole Gunnar Solskjaer has history with the striker from their time together at Molde.

Let’s take it to the next level at Old Trafford and give the fans something to sing about.