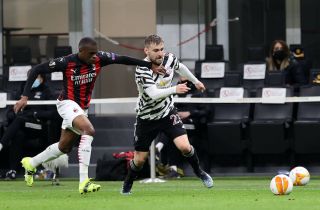 Manchester United are reportedly preparing to hold talks with Luke Shaw over a new contract.

The 25-year-old has played out of his skin this season after managing to stay injury-free, which wasn’t the case in previous years when injuries and niggles got in the way of Shaw’s development as a footballer.

However, according to the Daily Mirror, United are taking no chances by preparing to discuss a new deal for Shaw as a reward for his huge improvement in Ole Gunnar Solskjaer’s side.

Shaw’s resurgence has been a pleasure to watch and it came after United decided to sign a left-back who would potentially take the English left-back’s role in the team. Instead Alex Telles has played second fiddle to the former Southampton defender, and I don’t think fans would have it any other way given how Shaw has performed this season.

Some probably predicted that Telles’ arrival meant the end for Shaw’s Old Trafford career but that couldn’t be further from the truth. He has took encouragement from having competition in the squad and become a better player as a result.

There is no doubt in my mind that Shaw has earned a new contract at United.