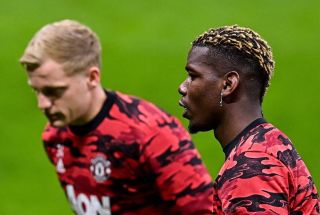 Ole Gunnar Solskjaer has sprung a surprise by naming both Paul Pogba and Donny van de Beek in his Manchester United lineup to face Leicester in the FA Cup quarter-final.

United can return to Wembley for their second FA Cup semi-final under Solskjaer with victory today, but it will be a tough task at the King Power against a side just one point behind the Reds in the Premier League.

Anyhow, Solskjaer has somewhat experimented with his starting XI, with Van de Beek, Pogba, Alex Telles and Anthony Martial all getting the nod this evening.

Van de Beek has not featured for the Reds since a substitute cameo in the 1-1 league draw against West Brom last month but is given a rare chance to impress.

Pogba was the match winner on Thursday against AC Milan and makes his first start in six weeks, with Bruno Fernandes dropping to the bench.

Van de Beek could start in Fernandes’ usual position with Pogba operating from the left, unless Solskjaer opts for the less familiar diamond formation.

Some United fans on social media are excited to see Van de Beek get his chance at the King Power.

Here's your #MUFC XI to face the Foxes 🦊

Great chance for him today 👏

Donny Van de Beek is starting a football match?
Shaw and Bruno rested and hopefully we won't need to bring them off the bench.
Hopefully Amad gets game time later.

This is our only chance for us to stop City winning the treble, COME ON UNITED 🔴 https://t.co/XKR8Bq55n1