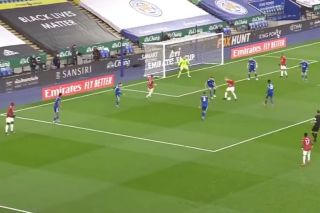 It’s 1-1 at the King Power Stadium in this evening’s FA Cup quarter-final between Leicester City and Manchester United.

United conceded after Fred gave the ball away at the edge of our own penalty box, but thankfully we kept pushing for a goal and found a way to equalise before going in at the break.

Donny Van de Beek got a rare start and will be delighted with his classy involvement in the goal.

A cross comes in from the left flank before Van de Beek steps over it before Greenwood finishes.