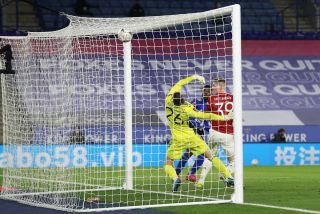 Manchester United are out of the FA Cup.

Leicester City were excellent in their 3-1 victory at the King Power Stadium as Ole Gunnar Solskjaer made a number of changes, resulting in a bog-standard performance.

Few players emerged at full-time with any credit.

All three goals conceded were atrocious, too, which won’t help the hangover tomorrow morning.

I’m deeply disappointed with the result. I thought, with the position we hold in the Premier League, there was room to focus on winning two trophies this season. Not that’s not the case and I’m feeling pretty flat about that. Right before a boring international break, too.

What concerns me is United look like a club content with top four. A horrible trait carried on from the ownership.

I didn’t see enough bite this evening. Or genuine desire to progress. Leicester wanted it more and that showed.

No excuses if we don’t lift the Europa League…

United are left with the less significant Europa League to end a drought of four years without a trophy. Solskjaer has made real progress but his squad could be at risk of becoming serial losers.

It wasn’t the result against a more focused Leicester side but the manner of defeat that was particularly disheartening, and the manager has to take responsibility for his role.

Solskjaer left out his two most important players and then took off his two most creative players when his team were chasing the game.

The quartet of changes was truly baffling and this isn’t the first time Solskjaer’s choice of personnel has backfired.

United will not win trophies with their current crop of defensive midfielders and that was just one department they were outclassed in at the King Power.

2 responses to “‘At risk of becoming serial losers’: United writers react to crashing out of the FA Cup”