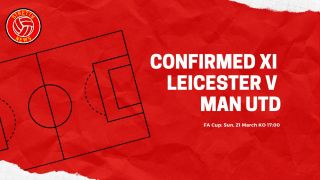 Manchester United are looking to book their place in the FA Cup semi-finals this evening at the King Power Stadium.

Standing in our way is Leicester City, who have six absentees going into the game — including star player James Maddison, with Ole Gunnar Solskjaer gunning for his first trophy as Manchester United manager.

Foxes boss Brendan Rodgers finds himself in the same boat and there’s an argument to be had whether he’s improved Leicester as a team from when they won the Premier League in 2015-16. They’ve never won the FA Cup nor has Rodgers.

Dean Henderson gets the nod again between the posts, but there’s a change at left-back with Alex Telles replacing the in-form Luke Shaw.

Aaron Wan-Bissaka is at right back Ole Gunnar Solskjaer has paired Harry Maguire with Victor Lindelof.

Fred and Matic sit at the base of our midfield with Paul Pogba, and there’s also a place for Donny Van de Beek in the line-up.

Here's your #MUFC XI to face the Foxes 🦊