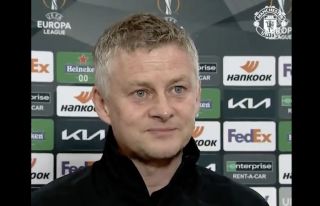 Manchester United manager Ole Gunnar Solskjaer has spoken out ahead of his side’s important second-leg knockout tie against AC Milan on Thursday night.

Coming into the game, following a late equaliser at Old Trafford last week, United know they need to win in order to progress to the competition’s next round.

Speaking ahead of the mouth-watering tie, Solskjaer has admitted that his team cannot afford to sit back and ‘soak up’ AC Milan’s pressure and promised fans his side will go all-out attack in order to secure the victory.

🦶 Playing on the front foot is the only way for United tonight, says Ole…#MUFC #UEL