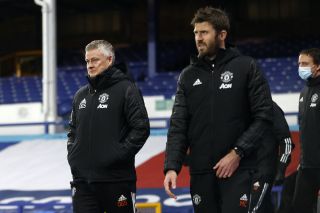 Ole Gunnar Solskjaer has suggested Manchester United midfielders Paul Pogba and Donny van de Beek will be utilised from the bench against AC Milan at the San Siro.

United drew the first-leg of the Europa League round-of-16 tie 1-1 at Old Trafford after Milan’s important last-minute away goal.

Solskjaer has named an unchanged side from the 1-0 Premier League victory over West Ham on Sunday but Pogba and Van de Beek both return to the matchday squad after spells on the sidelines.

Some fans clamoured for Pogba to start this evening but there was little surprise he wasn’t risked from the beginning after almost six-months out with injury.

Solskjaer stressed the importance of taking the game to the opponents in his pre-match interview and confirmed that Pogba would likely make an appearance from the bench.

“We might probably see both Donny [Van de Beek] and Paul [Pogba] and hopefully we don’t have to put David [de Gea] on,” he told MUTV, as quoted by the MEN.

“We have to go for it, but you might have to put players on to make a difference.

“Young Amad scored last time, so don’t be surprised if he comes on. We’re going for it, we know we have to score which is a good position to be in, we can’t sit back and soak up the pressure, we know we’re better when we go forward.”

Pogba, Van de Beek and Amad could all be important for the Reds should they be chasing goals in the second-half.

Amad netted his first United goal in the first-leg and will be desperate to make a similar impact to help send the Reds through to the Europa League quarter-finals this evening.