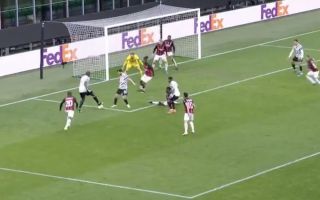 Paul Pogba has scored a crucial goal for Manchester United just two minutes after being brought on by Ole Gunnar Solskjaer against AC Milan at the San Siro.

The French midfielder came on for Marcus Rashford at half-time with United failing to create any spark before the pause.

And Solskjaer’s early intervention has been rewarded just seconds after the break as Pogba showcased his ability with a wonderful  near post finish.

Pogba is operating on the left-hand side and picked up the pieces in style after some uncertainty in the box.

The 28-year-old dummied before lifting the ball into the roof at the near post to beat AC Milan goalkeeper Gianluigi Donnarumma.

United will now go through to the Europa League quarter-finals if they do not concede at the San Siro.

See the goal below. Footage via BT Sport: