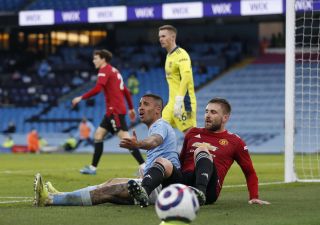 Luke Shaw and Jesse Lingard have both been recalled to Gareth Southgate’s 23-man England squad.

With that my biggest concern is Rashford being overplayed whilst on international duty — along with the fact some of our players are breaking their squad bubble by playing international football.

The Three Lions have 2022 World Cup qualifiers later this month against San Marino, Albania and Poland.

It’s a good chance for both Shaw and Lingard to impress the manager before he calls his squad for the European Championships this summer.

Buzzin to be recalled back into the @England squad after 2 years 😆 Its been a long journey very mentally challenging but full of hard work and belief 💪🏾 Thank you to everyone who believed in me, this is just the start ⚡️#workmode #JL11NGZ @WestHam pic.twitter.com/cFeZtiiW0X

Shaw has been the best left-back in the Premier League this season, while Lingard switched to West Ham on loan in January and rediscovered his mojo. Both players thoroughly deserve their call-ups but hopefully Rashford isn’t asked to play 90 minutes in any of the three games.

Here it is… your first #ThreeLions squad of the year! 👊

Why does Aaron Wan-Bissaka keep getting overlooked?

What a world we live in when Kieran Trippier gets picked over Wan-Bissaka.