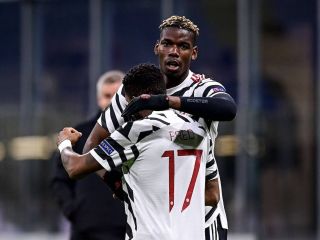 Manchester United have qualified for the quarter-finals of the Europa League after beating AC Milan 1-0 at the San Siro, thanks to a goal from half-time substitute Paul Pogba.

The Frenchman made a huge difference when he came on and scored minutes later after an important interception from Fred.

We’ll be in the hat for the draw which was the ultimate aim tonight as Ole Gunnar Solskjaer searches for his first trophy as United manager.

Knocking Milan out gives us a big advantage, and as a defensive duo Victor Lindelof and Harry Maguire deserve credit for dealing with the bit of pressure that was thrown at them towards the end.

Made a decent save in the first-half to stop Saelmaekers’ effort, but was made work harder by Zlatan Ibrahimovic later on. Very assured between the sticks.

Played a magnificent pass to Shaw before the break. Never gave us reasons to worry.

Solid throughout. Hopefully builds on this performance.

United’s main threat going forward in the first-half. Also made an important tackle to intercept a squared ball to Ibrahimovic.

Did well for Pogba’s goal to retain possession inside Milan’s box. Quiet other than that.

A constant physical presence in the middle. Showed a decent range of passing.

Wasteful. Needs to work on his final ball.

Still doesn’t look fit. Came off at half-time for Pogba.

Instant impact off the bench with his goal. Milan struggled to cope with him.

One response to “Player Ratings: Pogba’s influence off the bench crucial in Milan”