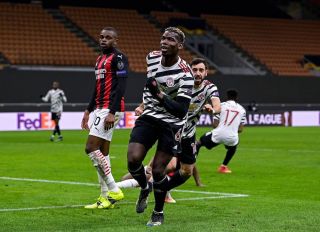 Paul Pogba was the match-winner for Manchester United as they sealed their progression through to the Europa League last-eight with a 1-0 victory over AC Milan at the San Siro.

Pogba was introduced for Marcus Rashford after the pause, and immediately started causing problems with his quality on the left.

The Frenchman has been sidelined for nearly six weeks and it would have been a risk for Solskjaer to name him in the starting lineup, but his decision to act at half-time was vindicated.

Pogba capitalised on uncertainty in the Milan area, dummied to trick the defence and cleverly fired past Gianluigi Donnarumma at the near post.

His 45-minute cameo was so important that it warranted a joint-highest rating in tonight’s Stretty News player ratings.

As per Statman Dave, Pogba created two chances, completed 78% of passes and made one interception.

United are into the quarter-finals of a competition again under Solskjaer’s tutelage and a fit and firing Pogba could make the decisive impact with United three games from Europa League glory.

Decisive from the bench. 🇫🇷 pic.twitter.com/Q0398FDg3r