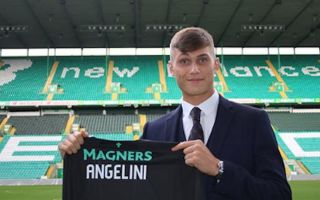 We reported last month that the Red Devils’ youth recruitment team had begun sounding out the young keeper’s availability.

However, after scouting the shot-stopper, Stretty News can reveal that the club has withdrawn their interest in the keeper.

Despite United taking a step back and the keeper recently rejecting a new contract with Celtic, which was expected, Angelini remains a man in demand.

With his current deal set to expire in the summer, a host of clubs are looking to offer the teenager a way out of Scotland.

A source close to the player has revealed to us that Premier League quartet Everton, Fulham, Brighton and Leeds United have all recently enquired about the youngster.

Given the fact Angelini shares nationalities with Scotland and Italy, there are also several clubs from the Serie A expressing an interest.

We understand that the three main clubs in the hunt for the highly-rated 17-year-old are Juventus, AC Milan and Lazio.

However, despite the huge list of interested clubs, both in England and Italy, it is our understanding that Everton, Brighton and Juventus appear most serious about signing the 17-year-old.

The keeper is expected to make a decision on his long-term future in the coming weeks.