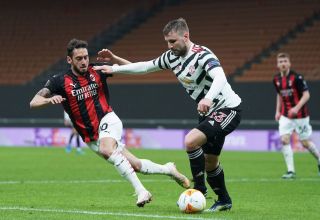 Manchester United left-back Luke Shaw has given a refreshingly honest post-match interview following his side’s 1-0 win against AC Milan in the Europa League.

In what was another close encounter following a 1-1 draw from the first-leg, United knew they had to travel to Italy and get a win if they were to progress further in Europe.

Despite finishing 1-0 to the Red Devils, fans were left on the edge of their seats after Thursday night’s game reached the break all square at 0-0, and Shaw has been quick to assess his side’s performance.

“Obviously, we’re very happy we’re through,” Shaw said (as quoted by BBC). “I’ll be honest, and the lads and staff would agree, we weren’t good at all especially first half we were awful.

“The first 10-15 minutes, we started well, kept control of the ball but it was like a switch – we turned off, kept giving away balls, bringing pressure on ourselves and we were lucky.”

Coming out for the second 45-minutes, Ole Gunnar Solskjaer made an inspired substation that saw midfielder Paul Pogba make a comeback from injury.

It took the French World Cup winner just two-minutes before gifting his side the lead after smashing the ball past Gianluigi Donnarumma from close range.

Going onto address the commanding midfielder’s impact, Shaw was quick to heap the praise on.

“Second half it always helps to have a world-class player like Paul (Pogba) to make a difference and he did that,” Shaw added. “But we know we need to be better than tonight.

“It’s a very good win and the positive is that we are through, we have players coming back and the squad looks better.”