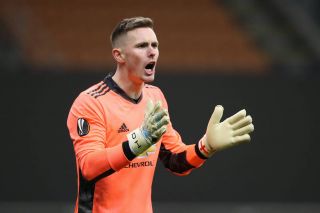 Although he made a costly mistake in the first leg against AC Milan, the Manchester United academy graduate stood tall between the sticks to keep his seventh clean sheet in eight games.

It was the reaction we wanted from him.

Henderson did well to stop Alexis Saelmaekers’ effort in the first-half and did better again to save a goal-bound attempt from Zlatan Ibrahimovic.

With David de Gea back in the squad following the birth of his daughter, Ole Gunnar Solskjaer must make a decision on Sunday when United take on Leicester City in an important FA Cup quarter-final.

I think he will stick with Henderson because he has no reason not to.

He took to Twitter with a reaction to the match, writing: “Yes! Perfect night in Milan!”