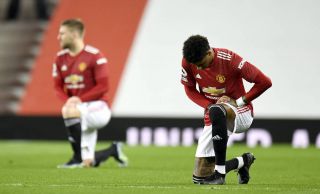 Ole Gunnar Solskjaer has named his Manchester United XI to take on AC Milan at the San Siro.

It’s about getting the job done tonight as Ole Gunnar Solskjaer searches for his first trophy as United manager.

Dean Henderson keeps his place between the sticks, behind a back four consisting of Aaron Wan-Bissaka, Victor Lindelof, Harry Maguire and Luke Shaw.

Solskjaer is taking no risks in midfield with Fred, Scott McTominay and Bruno Fernandes.

That leaves us with Daniel James, Mason Greenwood and Marcus Rashford in attack.

Edinson Cavani had to be withdrawn from the squad yesterday.

It will be interesting to see how we approach the game because United usually start games slowly. They can’t afford to do that tonight because a win is needed. The quicker we score the better.