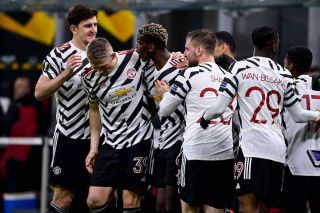 Paul Pogba stepped off the bench to made the decisive difference and send Manchester United through to the Europa League quarter-finals.

The Frenchman returned after a ten game absence and turned the game with a string-pulling performance off the left. Many of us were worried after Simon Kjaer’s late leveller at Old Trafford gave the Rossoneri a slender advantage, but United shrugged off that disappointment to advance with a professional performance in the iconic surroundings of one of the game’s grandest stages – the San Siro.

Here are five observations from the second leg. Bring on the quarters!

Like him or loathe him, there can be no denying that Paul Pogba is a baller when he wants to be. Despite the toxicity of his agent Mino Raiola and the controversy surrounding his future, even the most ardent ABU cannot deny his vital importance to this side.

United needed to score in the San Siro and never looked like doing so in the first half where, despite some neat and tidy football, we lacked creativity and spark. Enter, the Pog. Named on the bench after his injury lay-off, there was perhaps surprise that he took up a left-wing position but it proved an inspired change. Came up with the crucial goal, put a shift in, linked the play and Milan couldn’t cope with him. Pogba at his bullying and brilliant best.

Pogba’s was just one of many excellent individual showings in a United shirt. A sixth clean sheet in seven games proved the bedrock for the victory in the San Siro, but – whilst Harry Maguire and Dean Henderson was excellent – Victor Lindelof was a contender for man of the match.

The Iceman has been much maligned at times this season but the bigger the occasion, the better he seems to play. There’s something about these big ties that stirs something in the inner recess of the Iceman and he barely put a foot wrong, even when up against his compatriot Zlatan Ibrahimovic. Lindelof won every tackle, he was commanding, defended magnificently and ensured we kept Milan at arm’s length all night

Zlatan Ibrahimovic missed the first leg at Old Trafford but there was a sense of inevitability that the ageless Swede would feature at some point. More pertinently, you just knew he would have an impact. Brought on against one of his many former sides, Ibrahimovic was denied by Dean Henderson – a man 15 years his junior – in the only chance he had all night.It was a chance you would normally expect him to put away, but it was an excellent save from Henderson to redeem himself after his first leg error.

Zlatan, of course, was in the United side that won this competition back in 2017 but, on the day he was recalled to his country’s national squad, even he is now raging against the dying of the light. The figurehead of a young Milan side, Ibrahimovic’s return for a final flourish on the big occasion didn’t quite happen for him. It was nice to see him again though.

We’re at the business end of this tournament now with United into the last eight, maintaining Ole Gunnar Solskjaer’s 100% record – eight cup competitions, and eight quarter finals. The Reds will face one of Arsenal, Dinamo Zagreb, Slavia Prague, Granada, Roma, Villarreal or Ajax in the next round, and we’ll discover our fate when the draw is made on Friday morning.

United must surely be considered the favourites now after a hard fought 2-1 aggregate win over a good Milan side with the final to be played in Gdansk in May. Spurs and Rangers have gone out, leaving us and the Gunners as the only Premier League representatives remaining in the tournament. The Reds will certainly fancy their chances from here

When Manchester United were paired with Milan, it conjured up memories of the halcyon days of yesteryear. Not so long ago, this was a fixture fit for the Champions League semi-finals, with ten European Cups between the sides and stellar names like Seedorf, Cafu, Kaka, Inzaghi, Ronaldo, Rooney, Keane, Scholes and Giggs gracing the elite. It was undoubtedly the tie of the round, with Milan on the rise again in Serie A and United turning into an impressive team under Solskjaer.

For the final 20 minutes of the game at Old Trafford, and the first half at the San Siro, the Italians perhaps held the upper hand but – ultimately – two pieces of magic from Amad and Pogba proved enough for the Reds to get over the line. It was perhaps fitting and a sign of the times that these two fallen giants found themselves slumming it in the Europa League, but it is Solskjaer’s Reds who secure a famous win and march on in their quest for a second Europa Cup title. It always looked to be a tie with not between these two iconic clubs, but United got the job done.