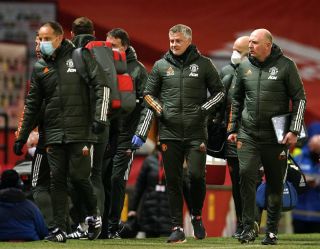 Ole Gunnar Solskjaer has downplayed the possibility of a fourth successive season without a trophy at Manchester United as long as they show progress in the Premier League.

Since that doesn’t mean winning the Premier League, I’m not sure how finishing second can be seen as an ultimate objective, in your second year as manager.

United have two knockout ties in the Europa League and the FA Cup this week away at AC Milan and Leicester City. I would go as far as to say this is a season-defining week for the Red Devils but Solskjaer doesn’t think so.

City are 14 points clear at the top of the Premier League, so you can forget about catching up with them when we’re still drawing too many games.

The Europa League presents a great opportunity for Solskjaer to win a trophy, which should be the ultimate aim with Champions League football pretty much secured for next season.

However, Solskjaer believes lifting the Europa League or the FA Cup would not necessarily signal United’s return to glory and suggested trophy-chasing was ‘an ego thing’ for some managers.

“When you see the culture of what’s happening every day, I feel a lot of improvement in the every day routine, every day work,” Solskjaer said, as per MEN. “The noys have taken on board what we want and it’s for others to assess how much of an improvement.

“We’re 12 points ahead of what we were at the same time in the league last season. Of course, we’re all aiming to win trophies at this club. But, as we’ve said, sometimes a trophy can hide the other fact of what’s happening at the club. It’s in the league position you see if you’re progressing, really.

“And sometimes in the cup tournaments you might be lucky, you might be unlucky, draws, different games decided by different factors. But we’re aiming to win, that’s why you play football, you always aim to win trophies.

“I’ve been here for two-and-a-half of those [trophy drought] years now and coming in, as I said so many times, I felt a big rebuild had to be made and it’s in the league position if you see any progress, for me. That’s always the bread and butter of the season, you see how capable you are of coping with ups and downs.

“Any cup competition can give you a trophy but sometimes it’s more of an ego thing for managers and clubs – ‘we’ve finally won something’. We need to see progress and if we perform well enough and progress well enough the trophies will end up at the club again.

“But it’s not like a trophy will say that we’re back, no. It’s the gradual progression, and the consistency of being top of the league, in and around there, and the odd trophies. Sometimes the cup competition can hide the fact you’re still struggling a little bit.”

Sir Alex Ferguson was able to win league titles and cup competitions, but I can’t say I agree with Solskjaer on this when trophies are demanded at Manchester United.

How can you downplay the chance to play in a final or to end the season with silverware? We should be a

Progress can be measured in multiple ways and I can see what Solskjaer is trying to say, but in response I ask for a trophy and to finish runners-up in the league this season.

Finishing second in the Premier League is a minimum.